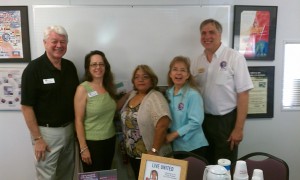 On August 8, 2013 Amigos Center celebrated the reopening of its newly refurbished immigration office at 25999 Old 41 Road in Bonita Springs on the campus of Hope Lutheran Church.  The President of Amigos en Cristo, Pastor Bob Selle, expressed his appreciation to all those who had contributed to this very important work and thanked them for their tireless efforts to support the Amigos Center’s services to the immigrant community of Southwest Florida.  Pastor Selle complimented the Amigos Center’s two Immigration Specialists, Christina Leddin and Maria Herrera and Administrative Assistant Marisol Dickerson for their excellent work in this ministry.  He pointed out that during the past year the immigration staff had counseled and assisted over 1600 immigrant clients, walking beside each of these individuals as they proceeded on their pathway to U.S. citizenship.   In addition, since August of 2012, the Amigos Center has filed over 390 Applications for Deferred Action for Childhood Arrivals (DACA) for undocumented young students and graduates who were brought to this country at a very early age by their parents or family members. These individuals who receive deferred action status can remain in this country, obtain a drivers license, a Social Security card, legally work and pay in-state tuition should they attend college. 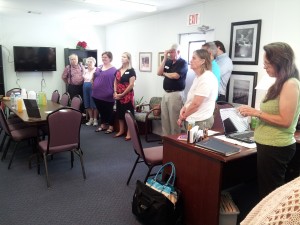 Amigos Center’s Executive Director, Denny Brown, also expressed his appreciation to all those who have, over the past decade, so faithfully supported this important ministry in our community, both financially and with their volunteer time, and urged them all to continue their efforts as the need for compassionate and professional immigration counseling and assistance has grown so substantially in Lee county in the past years.

We have been greatly blessed to have our Bonita Springs Amigos Center Immigration Office totally renovated.  The new décor makes for a much more enjoyable and professional working environment for our staff and clients.  This was made possible by the work and donations of a long time supporter of our Amigos Center work.  To God be the Glory! 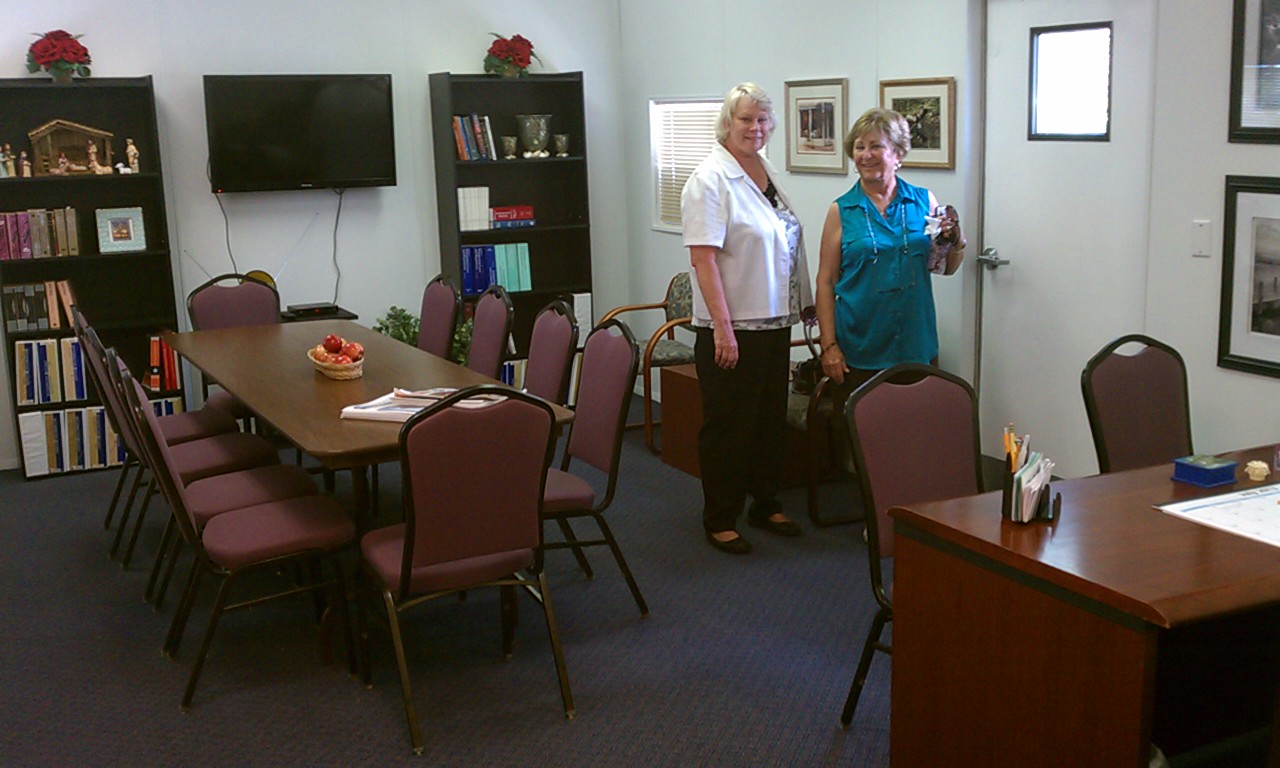 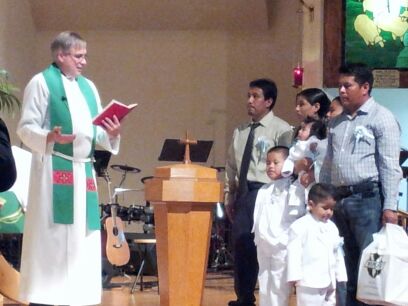 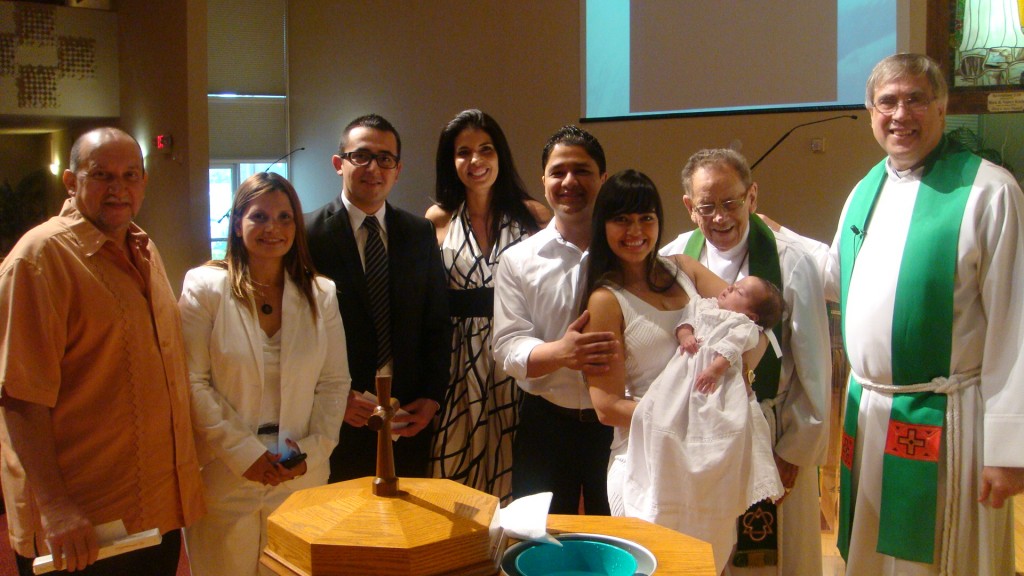 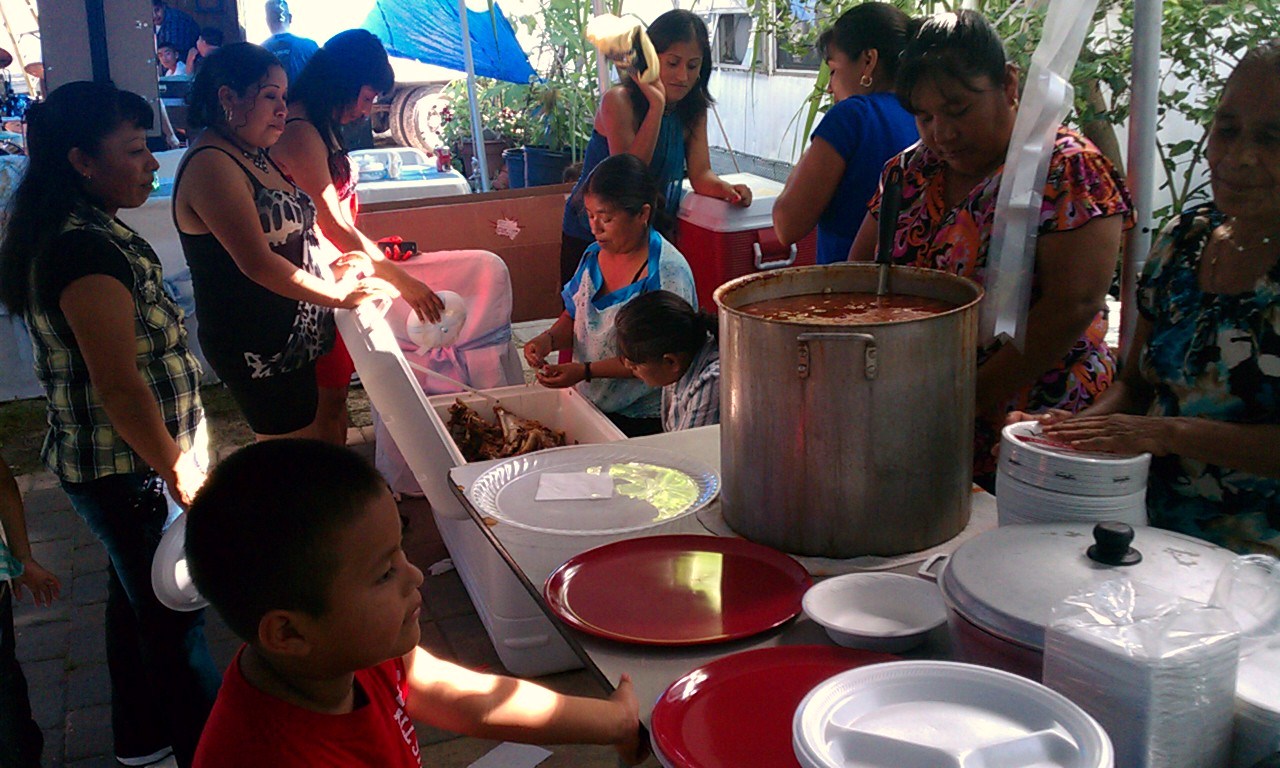 We recently baptized three young boys in our Bonita Springs Hispanic ministry at Hope Lutheran Church.  Pastor Selle and Donna participated in the celebration meal at the parents home next to our Kingston Amigos Center.

July 21 we also received Santiago Ortegon-Rujana as a member of the Kingdom of God through the waters of Baptism.  Santiago is the son of Jesaías (a member of our Board of Directors) and Eileen (our Webmaster). 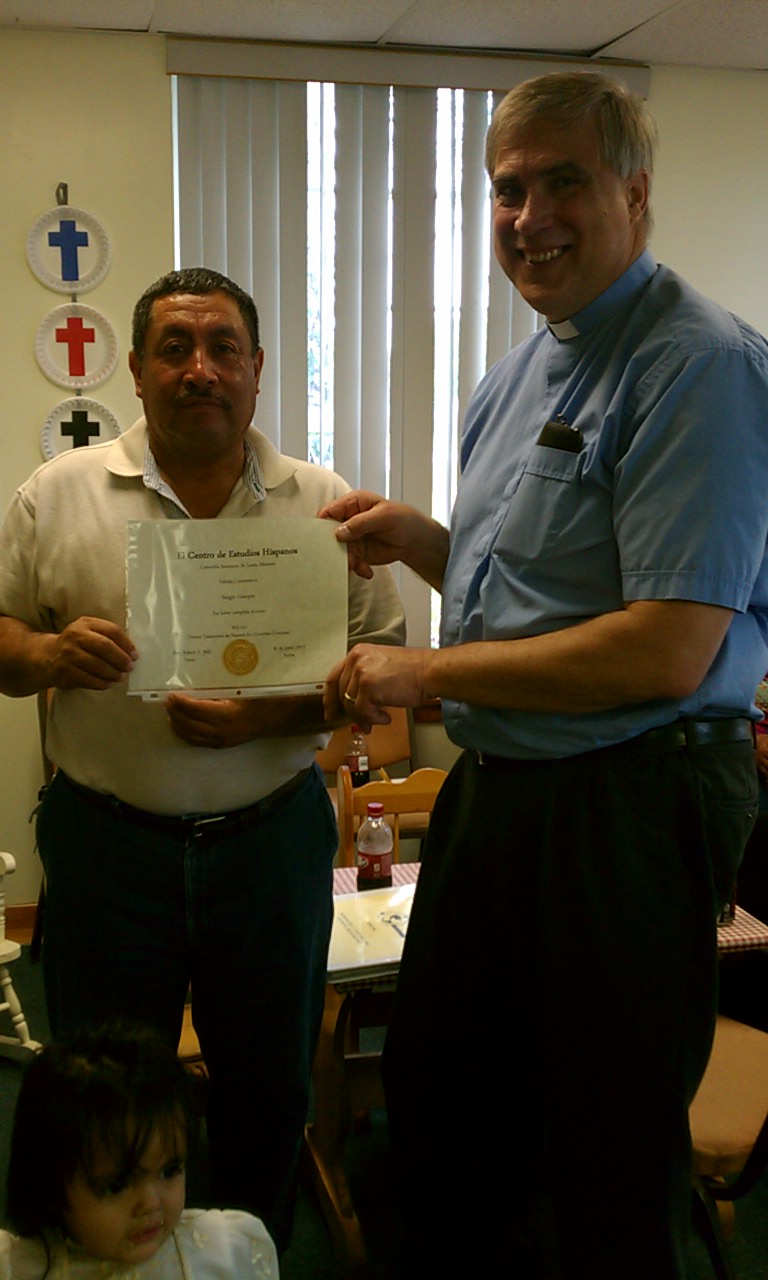 Pastor Selle presents Immokalee Lutheran Church member Sergio Campos with his certificate of completion of Christian Doctrine course with the Center for Hispanic Studies, Concordia Seminary, St. Louis, MO.  Eileen Rujana-Ortegon and Reynaldo Bernal of Bonita Springs also received their diplomas for completion of their Church History course.  This is an important way to prepare church leaders in the Hispanic church. 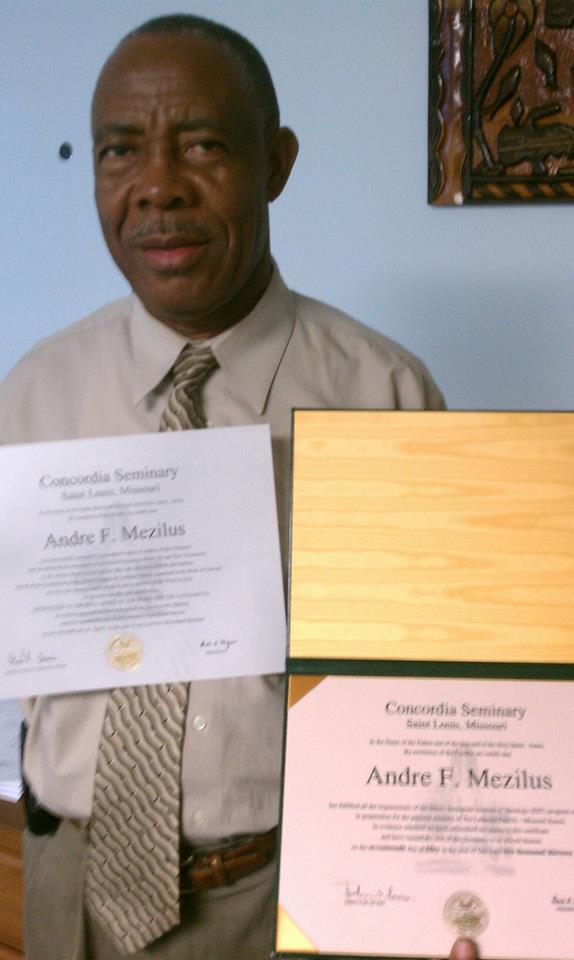 Andre Mezilus is pictured with his Theological Diploma and Certificate of Completion of Theological Studies at Concordia Seminary.  Andre has received a divine call from Amigos en Cristo to serve as pastor of our Immokalee Haitian Church.  He will be ordained and installed into the pastoral office at 4:00 PM on August 18, in Immokalee.  Please come and be a part of our history. 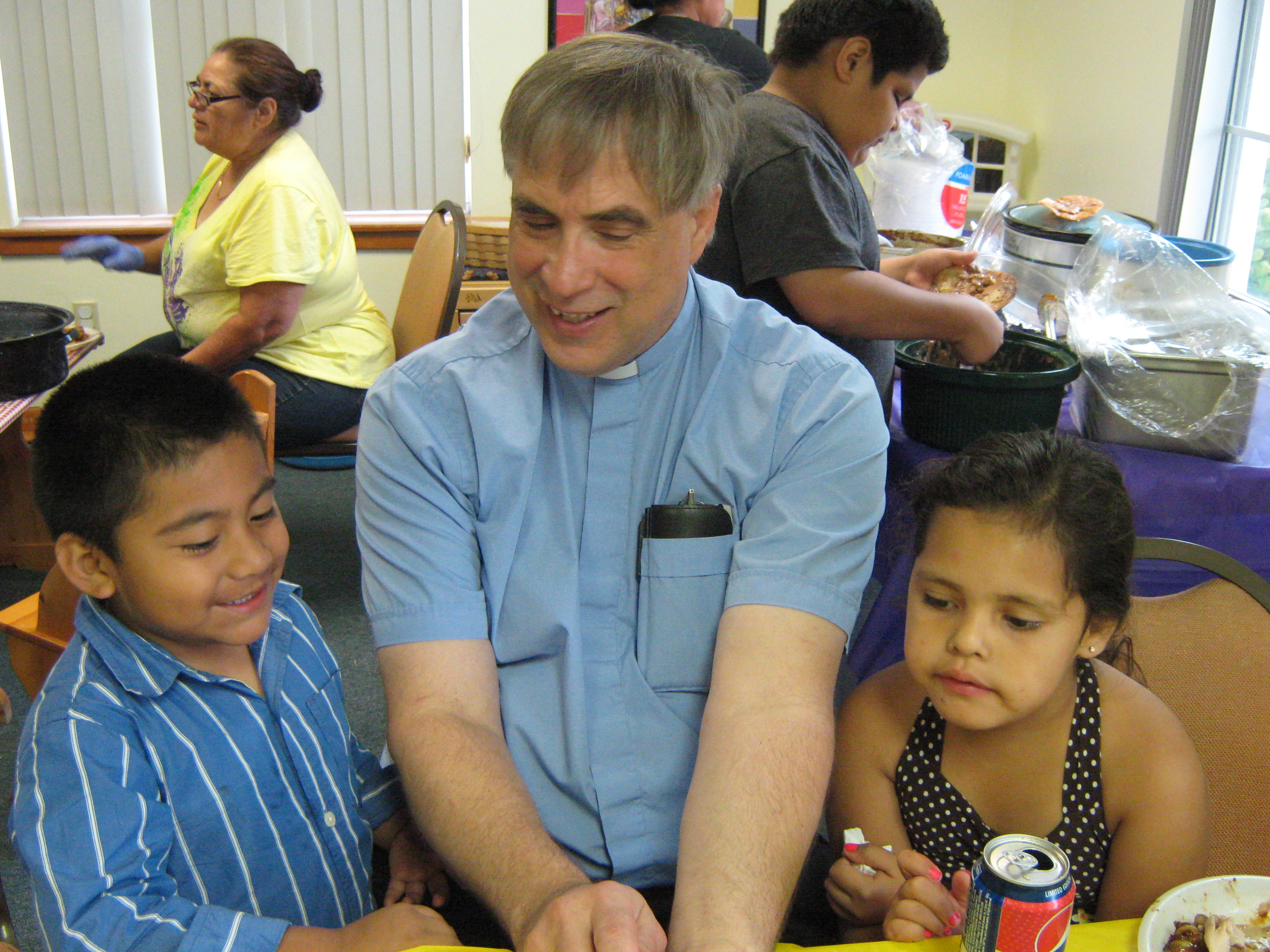 The last Sunday of each month is our Friendship Sunday where church members participate in an after service pot luck lunch.

Pictured is Pastor Selle entertaining some of our younger church members. 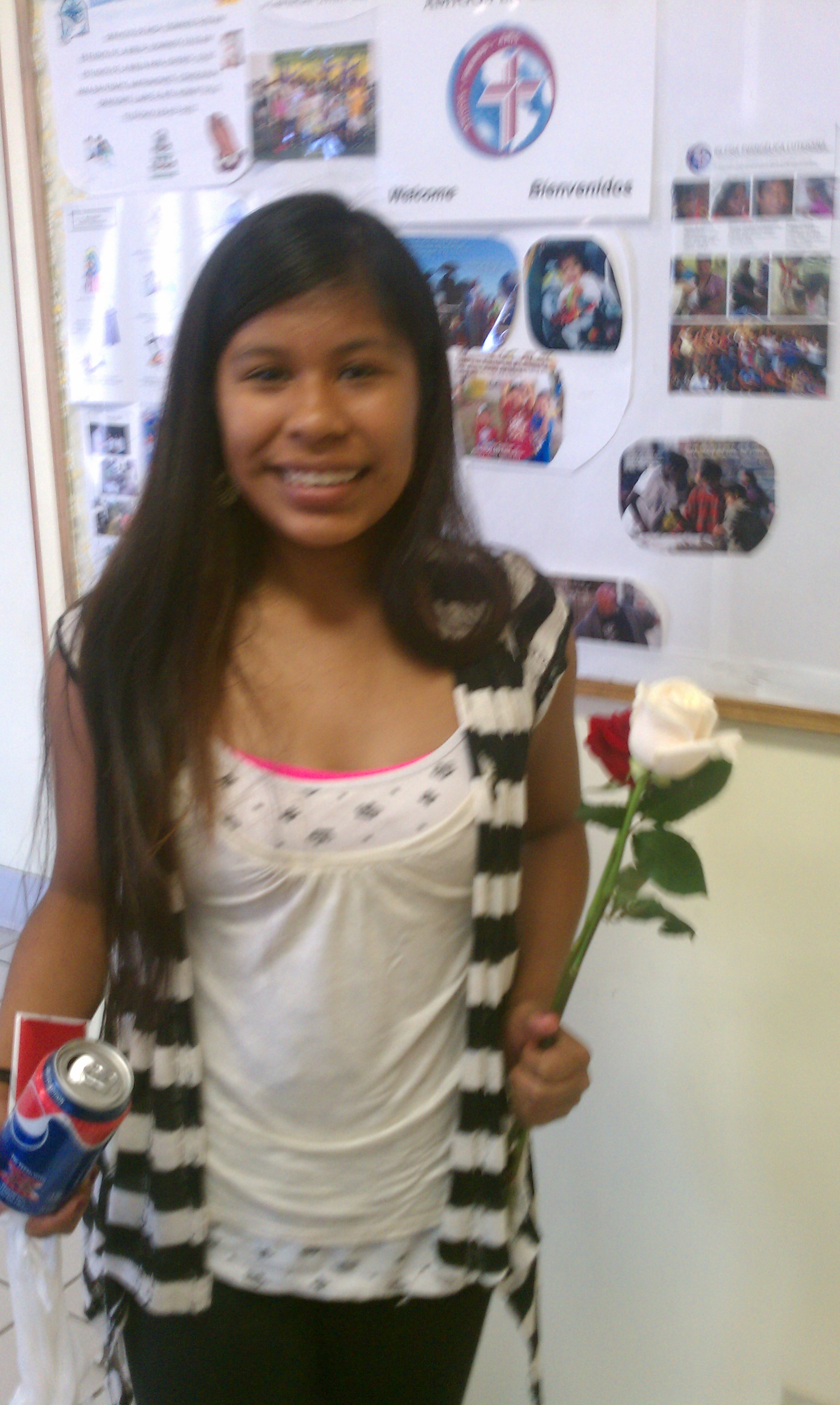 We are sending six teenagers (three Hispanic and three Haitian) to the Teen Leadership Summit hosted by the Florida-Georgia District LCMS in Lakeland, Florida this August.  Karl Glander and Daphcar Beldor will serve as chaperons.  One of the teen leaders is Yulisa.  She was baptized by Pastor Selle last year and is now in confirmation class.  While at the summit our teen will learn leadership skills that will serve them well both in the church as well as outside.  Pray for them.

Volunteer teacher Sue Chapman is pictured with some of her students.  We currently have three volunteer teachers at our Immokalee Amigos Center working with 74 enrolled English students.  Students are gradually using our English language learning lab with more frequency.  When not in class with their teacher, students are encouraged to log onto our Rosetta Stone software to work on their English language skills.  More students are returning to class now that the work in the fields has stopped during the summer months. 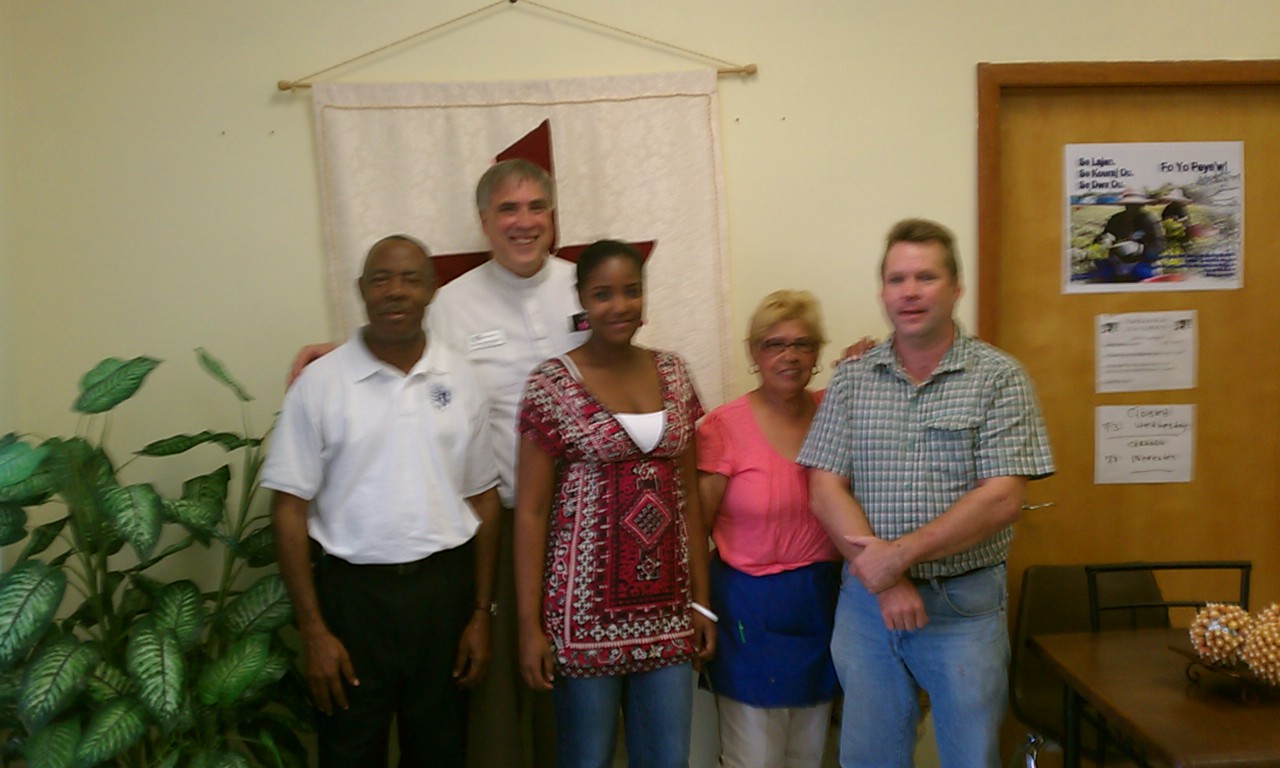 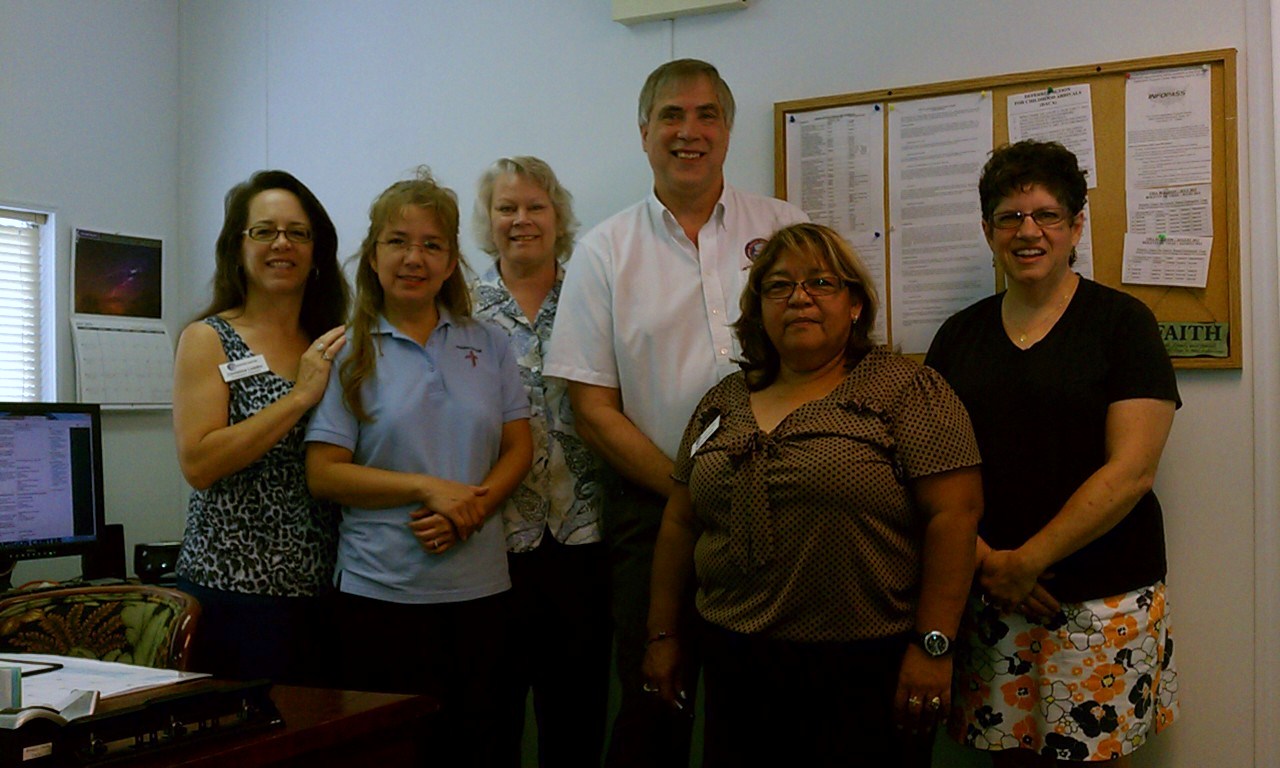 With the Congress of the United States now considering comprehensive immigration reform legislation, and the increase in the Latino community in Lee County growing by more than 170% over the past ten years, Amigos Center is indeed blessed to have on it’s staff a skilled and professional immigration team fully capable of addressing the challenges that lie ahead. Immigration law is considered by many to be one of the most difficult areas of the law, and Amigos’ two specialists, Christina Leddin and Maria Herrera are both accredited by the Board of Immigration Appeal to practice in this very demanding field.  During the past year, Christina and Maria, assisted by the skilled help of Administrative Assistants Marisol Dickerson and Maria  Isabel Diaz, managing the multitude of details required for each application, prepared over 1600 documents for immigrants and non citizens in southwest Florida.  These applications covered a large field of actions ranging from what is called a U visa for individuals and their minor children who have suffered substantial physical or mental abuse due to criminal activity, to applications known as Deferred Action for Childhood Arrivals (DACA) which seek to avoid the removal of bright young high school graduates and others who were brought to this country undocumented when they were very young and now know no other country.  The years ahead will certainly provide many more opportunities to assist immigrants and non residents in our community in their dreams to become United States citizens, and will require the help and support of our team and many others.  Pastor Bob Selle recently observed that “I am truly humbled when I see the wonderful work that our staff is doing in this area, and the help they are giving to some of the weakest of the weak in our society through this ministry.  I watch their work and always recall our Lord’s words: “Inasmuch as ye have done it unto one of the least of these my brethren, ye have done it unto me” Matthew 25:40 (KJV). 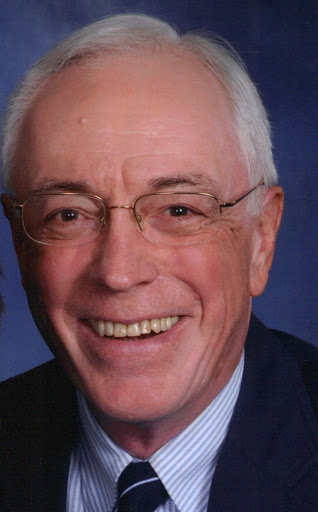